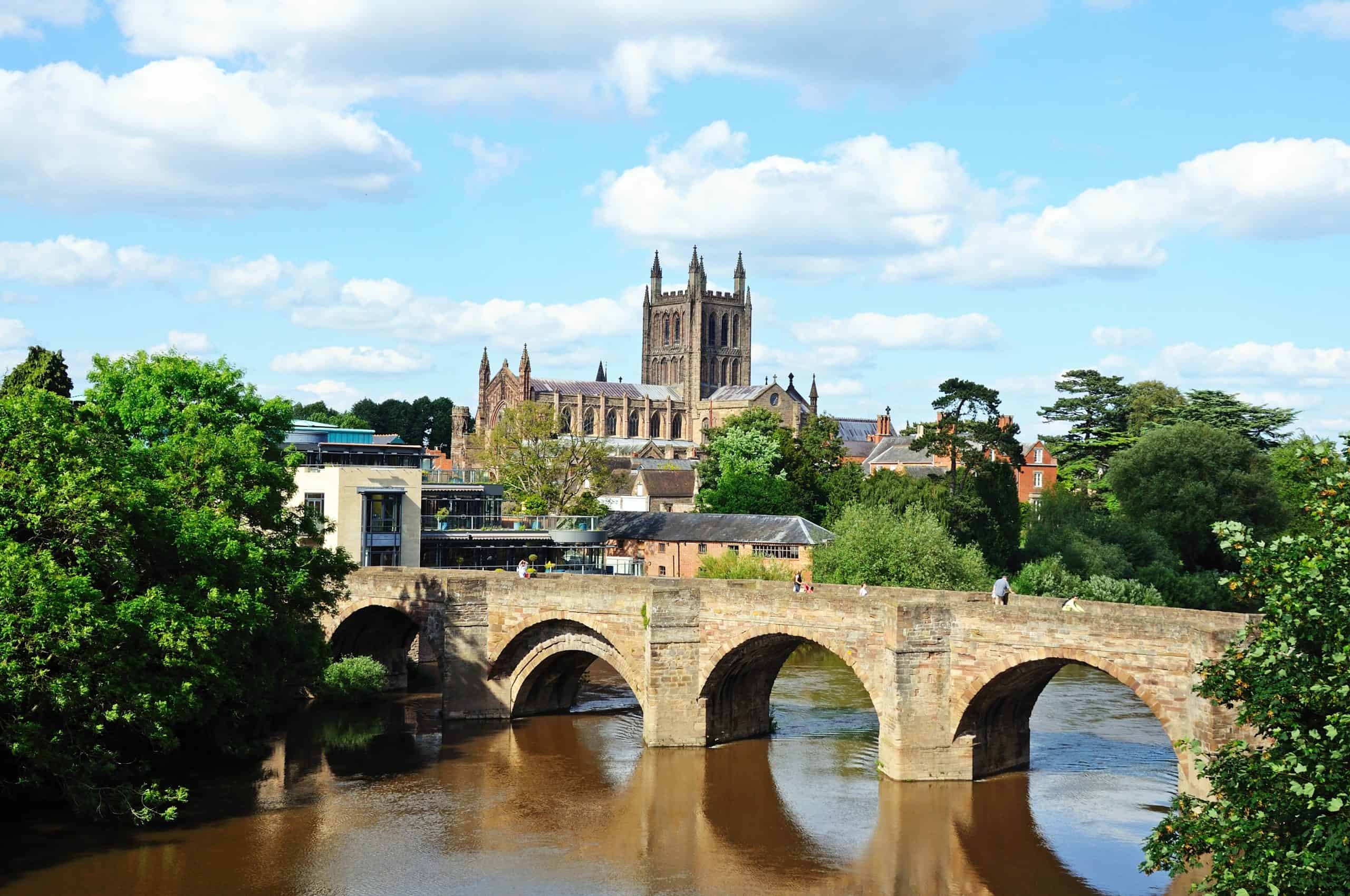 Herefordshire, also known as Hereford, is a historic county that covers a circular area in the Welsh borderland of west-central England. Not only is it home to The Hope & Anchor, but it also has many other hidden gems that we recommend you come to see. Discover sightseeing attractions and things to do while you’re in the area below.

Visit the Wye Valley for a rural retreat to remember. You’ll see some of the most breathtaking landscapes in Britain with dramatic scenery and wonderful wildlife. There’s an abundance of family-friendly outdoor adventures to go on too, such as cycling, kayaking and hiking.

Take a stroll through the winding narrow lanes of the Golden Valley’s picturesque countryside. You’ll spot a neolithic monument, historic churches and castle ruins for a step back in time. There are many rolling hills to climb too from the thrilling peaks of the Cat’s Back to Black Hill and Moccas Wood.

If you’re a fan of cider, look no further for your perfect day out. Herefordshire is known as the home of apples and cider. This is because it has the ideal soils and weather to grow the finest apples in the world and the process has been perfected for hundreds of years. There are three circular circuits to explore: North, South and West. Each one includes recommendations for places to break for a beverage or bite to eat, as well as a leisurely wander. You can also tour the Museum of Cider, situated in the original factory built in 1888.

If you fancy a long hike, put your walking boots on for a historical 44 mile/71km trek through Herefordshire’s wild landscapes. The Twin Valley Ley Line Trail has plush valleys and touches on historic landmarks including lost castles, sacred stones and remote churches. It celebrates Alfred Watkins’ discovery of ley lines, who was a pioneering photographer from Hereford. On June 30th 1921, Alfred Watkins stood on a Herefordshire hillside and realised that straight lines of sight crisscrossed the landscape, connecting ancient and spiritual sites. He named them ley lines and regarded them as what we’d call today a Sat Nav.

Hereford City sits right at the heart of the county Herefordshire, just on a loop of the famous River Wye. There are many hidden gems amongst the historic streets. Browse independent shops clustered along quirky Church Street with vintage and antique knick-knacks on offer, plus the Old Market, an open-air destination for further shopping and dining. Spot the ancient timbered houses along the way and absorb the olde-worlde feel.

Hereford’s Black and White House Museum, also known as ‘the Old House’, is a Jacobean timber-framed house with nearly four centuries of Hereford’s history preserved inside. Built in 1621, as a showpiece residence and store, it narrowly escaped the destruction of the early 1800s and was left standing alone. It was then reinvented as a saddler, fish and hardware shop, and later as a bank. In 1927, it was carefully restored to be a museum. It offers visitors a taste of what life was like back in 17th-century Hereford.

Enjoy your stay in historic Herefordshire and be sure to take lots of photos. We hope you come back soon!